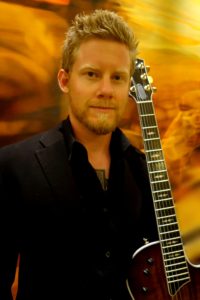 Brandon Wildish first picked up the guitar a little over 15 years ago and has been a gigging musician for 12 of those years. Early in his career he played intimate settings such as small venues and coffee shops. Years later he helped create the alternative rock group called Hope Departed. Brandon was in this band for several years and had an opportunity to play with other great bands like Bad Religion, Cotton Mouth Kings, Pepper, A Static Lullaby, Over It, and more.

Now Brandon is playing as a solo acoustic guitarist and vocalist. He has specifically built and styled a pedal board to expand his musical repertoire and perform the functions of a 1-man-band. Brandon released his debut album “Simplicities” late in 2013, and has recently released his follow up album “Other Side” which has been receiving positive reviews extending as far as Liverpool Eng;and. Brandon is available for most kinds of venues; be it bar/restaurant, private parties, weddings, and more.