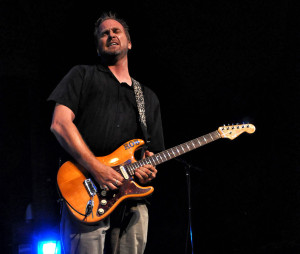 Rob Turrell is an award winning guitarist, singer, and songwriter from Southern California who has been playing professionally for 21 years.

Eric Clapton, Stevie Ray Vaughan, and Jimi Hendrix are probably the most recognized names in the realm of ‘guitar gods’ and are pioneers in rock, blues, pop and electrified music in general. Rob was heavily influenced in his playing by these three masters and is excited to breathe new life into their material and legendary live performances. For those lucky enough to have seen any of these legends perform live the experience was an explosion of improvisational genius blended with wonderful songs that still grace the radio waves of today and continue to gain new followers. Robs performance is guaranteed to touch on a piece of that magic and share it with new and old generations alike.

In 2012 Rob was the Recipient of the inaugural “Sunlight of the Spirit” award from the ASCAP Foundation, for an original composition he wrote for ASCAP President Paul Williams. Rob had the honor to be invited to New York to perform this composition and share the stage with Jason Mraz for this distinguished ceremony.

In 2014 he was the winner of ‘BLK Burgrz Annual Guitar Riff Off Jam’ amongst a field of 50 other guitarists. In 1998 he recorded original music in Nashville, TN with Mitch Mitchell and Billy Cox from The Jimi Hendrix Experience.

Rob’s guitar style is a powerful blend of Rock and Blues that has garnered attention from music enthusiasts across the country. Rob writes and performs for his own original band “Lime Street” based in Southern California. He has recorded and performed with members of The Jimi Hendrix Experience, Brian Setzer Orchestra, Sublime, Paul Williams, Jimmy Webb, and many others. In addition to a role as Pete Townshend in two different tribute bands to ‘The Who’, Rob has launched an exciting new band paying tribute to the guitar heroes Eric Clapton, Stevie Ray Vaughan, and Jimi Hendrix.