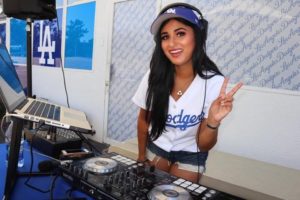 Miss Ninja earned her name when it was discovered that she is a Second Degree Black Belt and World Champion in the martial art of Ju-Jitsu. Both her time training on the mat and behind the turntables has given Miss Ninja super sharp skills as a fighter as well as a DJ. She is a recognized powerhouse known for her in depth knowledge of music. Miss Ninja has the ability to read and move a crowd. Spinning everything from 80’s to Top 40, 90’s Hip Hop to Electro & Dubstep, Disco to Classic Rock, she is able to deliver a sound that is always unique, energetic and exciting.

Sample of companies:: Universal, Disney, Nike, Smashbox, Salesforce, Cisco, Nvidia, Vice, Absolut Vodka, Live Nation, and Stanford University. In 2013, she completed her first European Tour where she DJ’d across France, Italy, Spain, Greece, Turkey, The Czech republic, and various other countries in the EU and UK. For the past few years, she has been touring the Caribbean and just wrapped up her second European tour.

She currently continues to tour the globe, killing crowds – one party at a time.