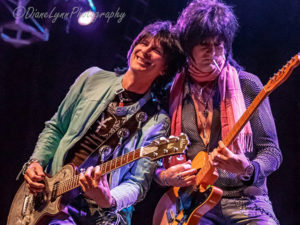 Known for their unprecedented high-energy performance, production standards and sonic
realism, The Ultimate Stones were hand-picked by Mark Cuban and Ryan Seacrest
to showcase their hit AXS TV show, The World’s Greatest Tribute Bands. Experience this eight piece extravaganza for yourself and you’ll see why they are the Ultimate Stones Band.

“Experiencing The Ultimate Stones is like time traveling back to the ‘60s and ‘70s, when five British bad boys marshaled the ambition, grit, and attitude to change the music world. These guys kill it, man, so duck and cover and have your mind blown by “The World’s Greatest Rolling Stones Tribute Band”. ‘Nuff said!”
— Michael Molenda, Editor-in-Chief, Guitar Player Magazine

“And then we have The Ultimate Stones, who apparently know what it takes to be effective, and do it on such a superior, professional level, it makes the rest of the “tribute bands”
look all the more inferior.”
– allaccessmagazine.com

” It was the largest crowd we ever had and we turned away a large number of fans.”
– Boomers Club