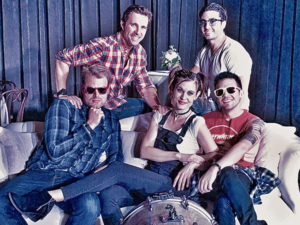 With the increasing popularity in decade nostalgia, comes the next era band…Bayside High capturing the style, the sights and most importantly the songs of the 90’s. Pop open a Zima, jump on The World Wide Web and relive the decade of one hit wonders with classic Boy Band chart toppers, the birth of Alternative, the best in Hip Hop, Dance and The Seattle/O.C. Ska and Punk movement.

Bayside High will take you back to a time when Zack, Kelly, Slater and Screech were your after school TV heroes, CDs ruled the world, Boy Bands in Reebok Pumps and overalls were all the rage. Grunge invaded the charts with corduroy and flannel,
and Jamba Juice and Starbucks
were The New Kids on The Block!