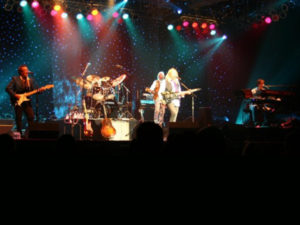 A salute to the Music of Tom Petty & the Heartbreakers.

There are tributes and then there are recreations that are incredibly lifelike. When it comes to the music of Tom Petty there is one band that recreates like no other – one band that rises to the ROOM AT THE TOP. Some of Los Angeles’ finest world-class musicians have been assembled ROOM AT THE TOP – the world’s greatest tribute to Tom Petty’s music.

Lead singer and Guitarist Jamie Browning has been the guitarist for the Righteous Brothers and Bill Medley since the mid ‘80s including the Dirty Dancing world tour and he replaced John Hall in Orleans (Still the One) As a signed artist to Columbia Jamie’s has played and recorded with Michael McDonald , Neil Young , The Monkees, Lyle Lovett, Buffalo Springfield, Iron Butterfly, The Association, David Hildago of Los Lobos , Sir Douglas Quintet and Herman’s Hermits along with many others.

Lead guitarist Larry Bustamante has performed with the Platters, the Drifters and Ike Turner. His excellent work as a guitarist includes studio sessions for recording artists Delaney Bramlett, David Britain; as well as production credits for “The Man Show” and “Saturday Night Live” animation spots. As a member of the Motown recording group, Jakata, Larry Bustamante performed on the Jerry Lewis Telethon featuring the MTV single, “Hell is on the Run”.

Bassist Bruce Borden has performed with Chuck Berry, Al Wilson (“Show and Tell”), Chuck Negron (Three Dog Night), The Coasters, The Drifters, and The Platters. He has also performed throughout Asia and the Pacific with the touring USO band “Wabash”. Bruce has enjoyed a long-time musical relationship with Jamie Browning.