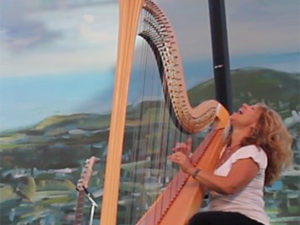 Frank Sinatra said “I hear what you’re doing and I really dig it!” With the release of her award winning eighth CD “After Hours”, which is now rising rapidly on the jazz charts, Lori Andrews continues to push the boundaries of what the harp can do, bridging the gap between traditionalism and contemporary jazz. Having distribution in Japan (Kanzen Records) and recently obtained distribution in Germany, Austria and Switzerland (Laika Records) she has become a mainstay of the festival circuit – wowing audiences worldwide with performances and interviews.

A past winner of the Jazziz Readers poll as best jazz harpist, Lori and her quartet have been featured at the Playboy Jazz Festival, Long Beach Jazz Festival, and Sacramento Jazz Festival as well as performing for presidents Clinton and Ford and the king and queen of Spain. Lori’s unique style has been heard for years with artists such as Luther Vandross, Gerald Levert, Mary J. Blige, Ruben Studdard, Michael Paulo, Mary Mary and Sygnature. She has played backup for entertainers ranging from Richard Dreyfuss, and Helen Hunt to Jennifer Garner and Charlize Theron, and has herself appeared in many of films and TV shows, including “Beaches,” “The Tonight Show,” “Melrose Place,” “Drew Carey,” “Ally McBeal” and MAD TV.

When most people think about a harp, they think of music that’s heavenly and classical. Lori Andrews has shattered that notion as she has become one of the best jazz harpists in the world. Lori’s moto? “Harp’s not just for breakfast anymore!”